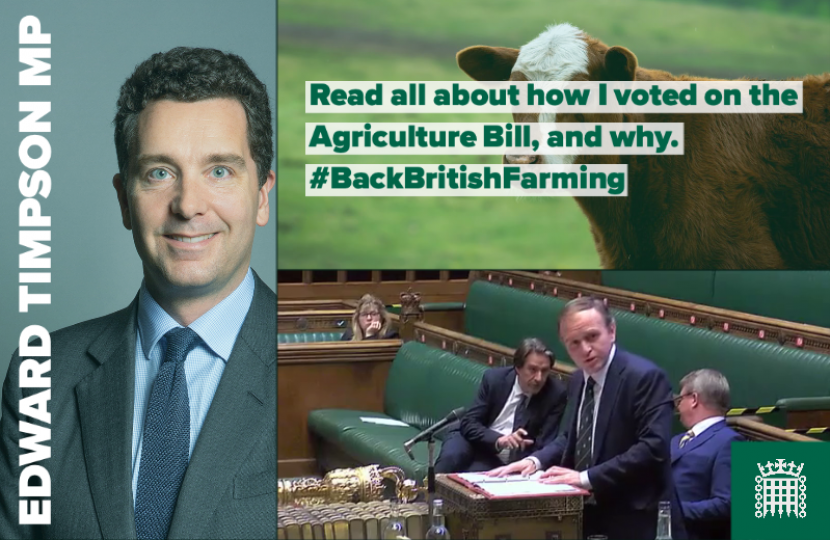 I appreciate the real concerns people have for the farming community, including here in Eddisbury, accentuated by the ongoing Covid-19 pandemic.

Some have been quick to judge my commitment to agriculture based solely on the Government's view of one poorly-drafted, back bench amendment to the Agriculture Bill.

This couldn't be more wrong. Here are the facts.

WHAT HAVE I BEEN DOING FOR EDDISBURY FARMERS?

I share the Eddisbury agricultural community's concerns, which is why I have been in regular contact with local farmers, the NFU and DEFRA Ministers to press the case for more support, throughout Covid-19 and beyond.

I have spent (quite literally) days on the telephone during the pandemic speaking to:

WHAT HAVE I ACHIEVED?

I have recently achieved real success with a new hardship fund for dairy.

Click here for my video update on the issue.

This new fund will enable eligible dairy farmers in England to apply for up to £10,000 each to help them overcome the impact of the coronavirus outbreak.

In addition, the Government has also backed a £1 million campaign to boost milk consumption and help producers use their surplus stock.

The £1 million promotional campaign will help increase sales of dairy products by encouraging the public to drink more milk.

This new innovative marketing campaign is a fantastic demonstration of what can be achieved when industry and Government join together to meet a common supply chain challenge.

It will support dairy farmers and processors in driving demand for milk within households across the UK. It will link consumers’ love of the great taste of milk and dairy with how we are all having to manage these challenging times at home and at work.

WHAT MORE DO I WANT TO DO FOR  EDDISBURY FARMERS?

I recognise that there is more to do, which is why I have also lobbied for an extension of the role of the Groceries Code Adjudicator, amongst other market reforms that can bring more stability and certainty to the agricultural sector.

WHAT ABOUT THE AGRICULTURE BILL?

I support the Agriculture Bill and what it does for Eddisbury farmers.

Food and farming is a bedrock of our local economy and environment, also generating £112 billion a year nationally, and helping shape some of our finest habitats and landscapes.

WHAT IS THE AGRICULTURE BILL?

In a nutshell, the new Bill will allow the UK to move to a system of paying farmers public money for public goods, including environmental protection, access to the countryside, and work to reduce flooding.

It will champion British food by improving transparency and fairness in the supply chain, and through investing in new technology and research to ensure our food producers remain competitive and innovative.

This Bill sets out future agricultural policy for England.

It does not cover international trade.

Specifically, it authorises expenditure for the following agricultural and other purposes:

I am pleased that the Government has guaranteed the current annual agricultural budget in every year of the new Parliament, giving significant certainty on funding for the coming years.

Nearly £3 billion of funding will top up the remaining EU funding to match the total funding for direct payments that was available for 2019.

FUNDING FOR CLIMATE CHANGE AND WILDLIFE

I know that many farmers are currently doing amazing things to benefit wildlife and counter the effects of climate change. I am pleased that now we have left the European Union, this country has the chance to tailor its agriculture policy to encourage this further.

We will move away from the EU’s bureaucratic Common Agricultural Policy and towards a fairer system where hard-working farmers are paid public money for the public goods they deliver. I understand that payments will be made for activities such as conserving plants grown or used in agricultural, horticultural or forestry activity. Land management actions which improve the quality of soil are also being considered.

I am aware that land managers in receipt of Direct Payments are also required to protect hedgerows on their land. Through agri-environment schemes, such as Countryside Stewardship, their valuable role is recognised, funding the management of hedgerows to deliver recognised benefits for wildlife, landscape and the historic environment.

BUT WHAT ABOUT THE FOOD STANDARDS AMENDMENT?

Indeed it replicated the Government's stated policy in an unconsidered way, rendering it unnecessary and unenforceable.

Had the new clause passed, it would have undermined the trade deals we currently have in place, and seek to undermine our ability to reach a trade deal with the European Union: potentially damaging to our farmers in the long term.

This is why 330 Conservative MPs opposed the amendment, with only 20 voting for it intentionally.

WHAT DOES THE GOVERNMENT BELIEVE?

This Government committed in its 2019 election manifesto (see page 57) to upholding our high environmental, food safety and animal welfare standards now that we have left the European Union.

We will stand firm in trade negotiations to ensure any future trade deals live up to the values of farmers and consumers across the UK.

In all of our trade negotiations, we will not compromise on our high environmental protection, animal welfare and food standards.

When we leave the EU, we will maintain the same import standards. No UK import standards will be diminished as part of a free trade agreement (FTA). We will also ensure that our own high domestic environmental protection, animal welfare and food safety standards are not undermined, by ensuring in any future agreement British farmers are always able to compete.

It is important to note that the UK currently operates trade on the grounds of adherence to sanitary and phytosanitary (SPS) requirements only. We do not require countries we trade with to follow UK domestic regulation on how food is produced, including in preferential trade agreements like CETA with Canada.

Nowhere else around the world do existing trade agreements include a requirement for partner countries to produce to another country’s domestic regulations and standards.

Insisting on UK domestic regulations being applied to the production of food, and not just on the SPS standards of what we allow to be imported, would be an unprecedented barrier to trade that doesn’t currently exist. It would also damage developing nations where access to UK markets is key to lifting millions out of extreme poverty.

We will always ensure that UK FTAs are fair and reciprocal. British farmers will not face unbalanced competition. We will be involving the National Farmers' Unions across the UK, through the Government’s Strategic Trade Advisory Group and our sector specific expert trade advisory groups, to ensure the views of the industry are represented. This means that they have a voice at the highest level of our trade negotiations.

Our analysis shows that the agri-food sector will benefit from a comprehensive trade agreement. An agreement will also benefit all parts of the UK, with Scotland and the Midlands set to benefit the most.

For example, an agreement with the US could remove tariffs of up to 26% on British beef: a market only recently opened and which is estimated to be worth £66m to UK farmers over the next 5 years. It could do the same for lamb. It is not well understood that the US are the second largest importers of lamb in the world, and even a 3% market share could boost annual UK exports by £18m. That is why, the CEO of the National Sheep Association says a USFTA “would benefit sheep farmers in all parts of Great Britain.”

Trade also improves farming resilience. So, our trade is vital for carcass balancing, the ability to sell cuts not wanted in the UK – and to deal with demand shocks and seasonal availability. Trade agreements will help and enhance UK farmers’ access to new markets, boost productivity and generate valuable new opportunities.

It is worth noting that the Trade Bill before the House is a continuity Bill. It cannot be used to implement an agreement with a country that did not have a trade agreement with the EU before exit day, such as the USA. The Bill is not about future deals and structures, it is about providing continuity for businesses so they can continue trading under existing arrangements.

We are determined to negotiate positive agreements for all farmers, wherever they are in the UK.

WHAT DID YOU DO ABOUT THE AMENDMENT BEFORE THE DEBATE?

I spoke with the Secretary of State directly in advance of the debate as, although I applied to the Speaker to speak, I was unsuccessful in the ballot.

The main reason for doing so was to seek reassurances on the issues Eddisbury farmers have raised with me.

The Secretary of State confirmed to me, and reiterated on the floor of the House of Commons, that:

The Government have a manifesto commitment that in all trade deals, they will not compromise on our high environmental protection, animal welfare and food standards.

AND WHAT DID YOU MAKE OF THE DEBATE BEFORE YOU VOTED?

I was mindful of the arguments made in relation to the New Clause made by others in the debate, including my neighbouring MP for North Shropshire, the Rt Hon Owen Paterson MP, that it was:

What we need is a successful outcome for farmers from future trade agreements.

That's the sort of approach the European Union takes, and we didn't like it. Indeed, we left.

This Government will always strive to achieve mutually agreed high food standards in trade agreements that both countries can proudly own, and I will continue to hold them to that commitment.

WHAT DID THE NFU PRESIDENT SAY ABOUT THE AMENDMENT?

Even the NFU President recognises that we are entirely sympathetic to the challenge: we just have a different way of dealing with it that will, in our judgement, be better for her members.

One of the major issues that came up in last week’s debate was around how our trade policy will deal with the threat of sub-standard food imports coming into the UK, unfairly competing against our farmers who are required to observe high and costly standards of production, and incentivising rather than discouraging less sustainable and lower welfare methods of food production across the world.

I appreciate that many MPs, while sympathetic to these concerns, felt unable to support the amendments that were tabled on this issue for a variety of reasons.

If you want to read more about this issue, you may find these articles by fellow rural Members of Parliament useful:

Many rural Conservative MPs, like me, voted for the Agriculture Bill last week on the understanding that our farming constituents would not be sacrificed in the coming trade deals. This is the great opportunity and challenge for British conservatism: to create a strong domestic base for our bold international ventures.

Tories have to choose between beef and liberty: Post-Brexit, Britain's farmers must come before free trade
by Danny Kruger MP, Devizes

Imported meat will need to meet requirements on the welfare of animals at slaughter.

Free trade is a huge opportunity which UK agriculture must seize.

The Agriculture Bill must facilitate that, and resist calls for narrow-minded protectionism which could squander a once-in-a-generation chance. 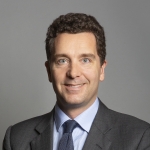 Edward Timpson was born in 1973 in Cheshire to John and Alex Timpson. He has an elder sister and brother as well as two adopted younger brothers.

His parents also fostered 87 children over the last 30 years, with many of whom Edward grew up.

Could you champion your local community?

Could you champion your local community?